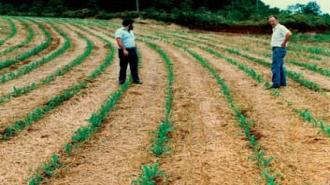 According to the Food and Agriculture Organization of the United Nations (FAO), CA is “an approach to managing agroecosystems for improved and sustained productivity, increased profits and food security, while preserving and enhancing the resource base and the environment”. In essence, CA is concerned with profitable and sustainable agricultural production – that is, maximizing farm profits in the long-term by optimizing agricultural production while conserving inputs (labor, fuel, seed, fertilizer, pesticides, etc.) and minimizing or mitigating any impacts on natural resources (soil, water and air). However, these words can’t really persuade a farmer to practice CA, nor they acknowledge the reason behind its initiation. In general extension approaches facing difficulty in promoting a technology or any new practice can be ascertained. Its common that a farmer won’t accept it at first but what makes it worse is when farmers have misperception regarding any new practices. This creates an atmosphere of disbelief and false perception towards the presumed practice and/or technology to be promoted. Similar seems to be the case with the promotion of CA in many places of the world.

There are a number of misperceptions about CA often held by farmers and others when they are first informed about the concept of CA. Some of these misperceptions originate from people outside the region who have dogmatic and rigid views on what is CA, and how it should be implemented. The misperceptions are sometimes proliferated by academics, farm advisers and researchers with inflexible mind-sets. Many people who don’t realize how widely CA has been adopted around the world believe CA won’t work on their soil or farming system. Part of this misperception is the belief that crops cannot be successfully planted and established without tillage, especially on hard or stony soils. CA is often promoted as a technology particularly suited to dry areas and as a way of combating drought, but this does not mean it is not applicable in medium and high rainfall zones, or under irrigation. There is evidence from southern and eastern Africa indicating that the benefits of CA are less in high rainfall areas where waterlogging occurs because of increased rainfall infiltration. But this has not been observed in the Middle East or North Africa. Certainly, soil cover and ZT decrease the risk of soil erosion in high rainfall areas with high slope.

While keeping the residue undisturbed is best-practice, there is little evidence to suggest that ZT(Zero Tiller) disc seeders which disturb a very small minority of the soil surface provide superior crop performance to ZT line seeders which disturb more of soil. Technically, some disc seeders can cause high soil disturbance depending upon their design blade, set-up and operation. In comparison, some line seeders cause much less soil disturbance. Disc seeders have some well documented limitations, particularly in degraded soils commonly found when transitioning to CA. There is a large array of seeders which produce reduced or minimum soil disturbance, and researchers and farmers are often confused about which are the best seeder features for their circumstances. Often, farmers and researchers use a ZT seeder which is either not suitable for the conditions and/or incorrectly set-up and calibrated, and hence, poor establishment and crop growth results. In the absence of better knowledge, they conclude that ZT does not work well. In almost every case, ZT seeders need to be fine-tuned to local conditions to get the best performance.

Some researchers and extension specialists believe that soil cover is a critical part of CA, and without it, farmers will not benefit from the adoption of the other principles. While there is evidence to support this in eastern and southern Africa, this does not hold true in the all places. Significant benefits were recorded by farmers in Syria and Iraq solely with ZT and early sowing, even when crop residues were heavily grazed and crop rotation was dominated by cereals. There is also evidence to suggest that light grazing of residues may provide a useful benefit to livestock while the remaining residues help protect the soil from erosion and maintain soil fertility. Problem is seen in allowing farmers to maintain livestock grazing during the transition to CA which enables a much more attractive and low risks package, without challenging the economic stability of their existing crop-livestock systems.

Many farmers complain that legume and other alternative crops require more work and their yields are lower compared to cereals. While the yield of these alternative crops is usually lower than cereals, this is often offset by higher prices, although production costs can also penalize legume and other crops. More than ever, a farming systems approach is required to successfully conduct a CA production system. There is much that needs to be done to develop and promote more profitable legumes and alternative crops. Government policies that encourage wheat production need reviewing, and the general crop management skills of many farmers needs to be improved. Managing two or more different types of crops in CA adds complexity to farm management and can be hard work, but some farmers manage these issues effectively because they can see how crop rotation is important for the long-term profitability of their farms.

An effective fallow can conserve moisture from one season to the next and benefit following crops in low rainfall environments. However, the benefits are inconsistent, and often much of the soil moisture is lost through evaporation during the long hot and dry summers. Most studies show that on average the extra yield of the crop following the fallow does not compensate for the total yield that would have been produced by growing a crop every year instead of the fallow. Likewise, the increases in soil fertility during fallow phases are typically small. Instead of using a fallow phase, farmers in low rainfall areas are better off planting a crop every year. The risk of crop failure due to drought is decreased in CA systems because soil evaporation is reduced, and rainfall infiltration and water-use efficiency are increased. So this should give farmers confidence to replace fallow with a CA crop, ideally a low-cost food or forage legume.

The misperception is not surprising when you consider that some older farmers may have plowed their fields multiple times for 30 years or more, mainly to reduce the populations of weeds and other pests. The population of weeds, diseases and pests usually changes when CA is implemented, but the overall burden often remains the same, especially in dry areas. Some biological species are favored by some of the CA technologies, and others are suppressed by the elimination of ZT, rotation of crops, and retaining soil cover. Provided an integrated approach employing a range of strategies is used, weeds, diseases and pests can be managed effectively under CA systems. Good knowledge and crop management skills are required in CA, especially if new pests emerge. Rodents are a common problem under CA, especially when a ZT field is surrounded by cultivated fields.

There is misperception regarding the need of inputs (especially pesticides) in CA. If the overall burden of weeds, diseases and other pests are similar, then there no greater reliance on pesticides in CA compared to conventional systems. In general, post-emergent applications of herbicides, fungicides and insecticides will be similar in CA and conventional systems. In all cases where ZT is adopted there are significant reductions in fuel and labor costs, and also savings in seed inputs are likely. If legumes are added to the rotation, organic nitrogen can be more available, and in some cases phosphorus fertilizer can also be decreased. Under irrigation less water is often required.

Some farmers, academics and others consider tillage or seedbed preparation is a key operation for a successful crop and that ZT contradicts their agricultural culture and heritage. Farmers who don’t till their fields are sometimes labelled as lazy, messy, and not serious by others. These people are often not open to change, and are difficult to argue with. But most farmers listen to other successful farmers, and the early adopting farmers need to be supported and included in CA promotion activities. A gradual process of evidence-based assessments and empowerment with accurate information supporting a fitting alternative can soon lead to changed mindset. How can we expect to improve our farm productivity without trying something new? As Albert Einstein said “The definition of insanity is doing the same thing over and over again and expecting different results.” Many farmers appreciate that they don’t just inherit their land from their fathers, but they are also its custodians for their children, and grandchildren. If they don’t care for their soil and farms, their descendants will suffer. 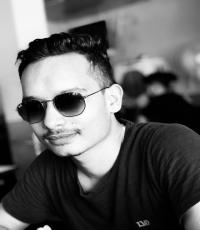